Its All About The Base

When Avalon started climbing the charts I decided to follow up with another game using the same game engine with some improvements. I started off looking at the graphics plot system and added a few go faster tweaks. I also enhanced the game engine to give me a greater number of adventure steps. I wanted Dragontorc to be bigger and better, a tall order considering I had a job to squeeze Avalon into the Spectrum's meagre memory.  Working on the technical aspects gave me time to consider the plot.  I needed inspiration so visited the library and came back with a stack of books including Joy Chant's The High Kings.  This is a very well presented collection of old Celtic tales which are told by Arthur and his knights as they sit around  their camp fire. It is sad that the old Celtic tales are not really part of our lives, At school we learn old Jewish tales and now the tales of many other religions yet there is a rich heritage of  native tales that are part of our heritage.
I liked the idea of Tolkien's of layers of history that underpin the Lord Of The Rings. Sometimes they appear as mere glimpses which give them even more mystery. I started thinking about the history of Britain and liked the idea of hidden history that is mostly obscured. So the idea of the lost realms was born I based my lost realms on ancient tribal regions of pre Roman Britain.   The period I chose was the time just after the fall of Roman Britain when the surviving Britons may very well have tried to resurrect ancient kingdoms in the struggle for survival.  As evidence was scanty for the period it gave me licence to invent what I needed. Avalon was also set in this period with references to the old Celtic legends of Arthur rather than the Anglo Saxon rewrite that tried to claim Arthur as their own. Thus the sword was called Caliburn rather than Excalibur.At the end of Avalon it ended up in the stone to match popular myth although in the old legends there was actually more than one sword. There was the one in the stone and the one given by the lady of the lake. I planned a third episode that would include a young Arthur  and would end up with him reclaiming the sword but this did not get written. 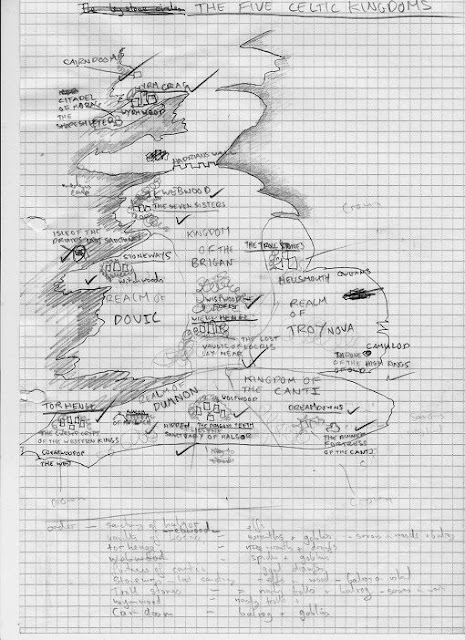 So to make the plot bigger I opened up the scenario to include locations all over Britain. Each location was based on a lost realm plus one for the final confrontation of the evil queen. I wanted to give the feeling that the player was not the only party trying to recover the lost crowns. Originally I was going to have Anglo Saxon warriors gradually move across  the map so it was a race against time. This idea was eventually put to the side, the only relic of it being the warrior  and ship on the screen surround.
I drew up a list pf the spells and kept the ones I liked and added  few new ones. I also added a system of "curses". Various things could affect the player giving him failing heath, blindness, slow motion etc. The system allowed for each to have a cure. I enhanced the spell system to allow a quick exit from spell mode by moving the joystick sideways. This was a result of watching people struggle to get out of spell mode and run when attacked by an enemy. 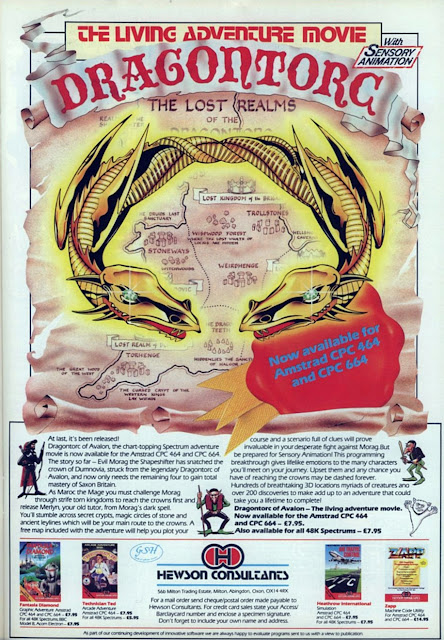 I did some work on the AI to improve the way the characters acted. In Avalon there was a system that chose a movement pattern based on how afraid the enemy was. I made this into a two dimensional system by added a like/dislike dimension. So the relation you had with a character and their fear status were used to choose a movement pattern. You could affect the like/dislike factor by attacking or doing friendly actions such as giving items that the characters liked.  Fear was affected by using magic or by managing to kill an enemy. It was a very advanced system for its time and allowed the player to make allies which were needed to attack invisible enemies in the final scenario.
I enhanced the graphic look by including outdoor scenes such as the stone rings and wood lands. They are all built out of the basic theatre backdrop  room sections. I used the same style of graphics throughout where I Just drew the highlights on the background objects. That way you can suggest detail that is not there and the brain fills in the rest.
As the majority of the code was the same the game was developed very quickly. I was still not using an assembler but at this stage had hooked up a disassembler to a Centronics printer and managed to get it to read my label table that I used in my hex loader. This gave me a source listing with my own labels in it allowing me to check that my hand assembly was correct and allowing me to throw away all the original squared paper with the hand written code.
Andrew and I play tested the adventure for me with no cheats.  It was a pain testing when you played for days then found an event code was wrong so could not complete an adventure step. I used to fix the data with Andrew's peek/poke monitor and carefully record all the changes for the next test run. In the end I could run through the whole game in a few hours.
We had the game launch at the London Museum which included a brief tour of the dark age exhibits. Andrew Hewson used to work at the British Museum so managed to borrow a solid gold copy of a real Celtic torque which unfortunately was copyrighted (even though it was a copy) so we could not take photos .

I think I tweeted this once or maybe even blogged about it, but here is a larger explanation with my idea of using it to evolve algorithms.
Turing showed that a simple machine that could read a binary string of digits from a " tape" and change them if needed could run any program and was equivalent to any computing device that can be invented.  I changed the format very slightly for my version . The tape in this version is the character string sTape. Turing specifies an infinitely long tape but you only need that for programs that run forever.   His machine  operates on a series of instructions. Each line of the Turing program reads a digit from the tape and decides on one of two actions depending on the data being 1 or 0.  Each line is essentially an if else structure.  The actions are what to write to the tape and which direction to move it. Each of the branches can go to another line of the Turing program.  Thus loops, if else, call structures can all be implemented.
The actual Turing machine is implemented in the macro OP. This allows lines of code to be easily listed.
*ptr  reads a character form the tape. Then it decides if it is zero or not and goes down the appropriate branch. Each branch can write a one or a zero, move the tape left or right and then got to another line of the program or eventually stop.
The Turing code is hard to write but you can write anything with a bit of thought. You have to decide about how numbers are going be represented on the tape and process them accordingly. Also where results are written to the tape had to be worked out and the program may pend most of its time moving the tape between input and output. You an extend the idea to use more then one tape, ascii rather tan bit input but the point was Turing showed all these were technically equivalent and were optimisations rather than fundamentally changing what could be done.
Turing investigated what is called the stopping problem. You can write an algorithm to do something but you do not know whether the code will actually ever stop and give you the result. He imagined a program that examined all  programs to see whether they stopped. He proved no such algorithm existed so you could not know whether a program will actually stop or not.
In the book The Emperors New Mind  there is a listing of  generic Turing Machine program that can run any Turing program.   It is pages of ones and zeroes I doubt it would ever work  having typed in more meaningful programs in days gone by from magazines and never getting them working.
I was experimenting with this as it ran in a sandbox with a limited instruction set of 1 generic instruction. I was trying to evolve Turin programs  by randomly taking bits of one set of code and joining them with another version of the code. you then run it for  a limited number of steps and assign a fitness weight to that version of the code by looking at the results and comparing them with a set of rules.  I tried to evolve a program to calculate a square root as that is quite easy to test for accuracy and give a score. Initially I got good results for one input number but could not get it evolved to do the general case of any input number. I used to play around with these conundrums in my lunch hour to keep me amused.
I changed the way Turing instructions were encoded slightly so they contained no redundant bits so can be mutated but still always give a valid code (but maybe not a valid program You need to provide contingency for the tape length being exceeded and the GOTO number being excessive of infinite loops. Here is just the basic version for simplicity. It is surprisingly small.
#define RIGHT -1
#define LEFT +1
#define OP(Label,Go0,Op0,Mv0, Go1,Op1,Mv1)\
Label:\
if (*ptr=='0')\
{\
*ptr =#@Op0;\
ptr+=(Mv0);\
goto Go0;\
}else\
{\
*ptr =#@Op1;\
ptr+=(Mv1);\
goto Go1;\
}
void DoTuringMachine ()
{
TCHAR* ptr = NULL;
TCHAR sTape[200] = "0000000000000000000000001111100";
long lHigh =0;
long lLow  =0;
ptr = sTape+strlen(sTape)-1; //start at far right
OP (S0,  S0,0,RIGHT, S1,0,RIGHT);  //bypass 00 destroy  first1
OP (S1,  S2,1,LEFT , S1,1,RIGHT);  //bypass 111 add1 toleft
OP (S2,  S3,0,RIGHT , S4,0,RIGHT);
OP (S3,  Exit,1,RIGHT ,S3,1,RIGHT);
OP (S4,  S5,1,LEFT , S4,1,RIGHT);
OP (S5,  S2,1,LEFT , S5,1,LEFT);
Exit:
return;
}
Another idea I explored came from a book about Chaos Theory. A researcher programmed a logic grid that employed an array of simulated logic gates. Each accepted input from two others and set its state according to the rules of the gate. For example if it was an OR then if either input was 1 it sets it to a one.   What they found as that the array settled down usually in an amazingly few number of updates into stable set of states that cycled.  I reckon the brain starts off doing something similar with a neural network and then finds uses for patterns that just happen to match , rather than constructing them from scratch.
I programmed a logic array and then tried to evolve it by changing the gates. My intention was to combine the idea with the Turin code so rather than the if/else each line can have any logic gate and two inputs. I would love to be able to evolve game code rather than write it the hard way. I get these crazy ideas now and then but am too busy to follow them through. Maybe it will inspire somebody to write the next generation AI.
Labels: AI Deepest Blue Dragontorc Graftgold